Controversy may erupt when immigrant populations build commemorative works that denounce totalitarian regimes that are still in power or memorialize crimes or tragedies that haven’t been officially recognized by their new homeland’s governments or the perpetrators. These ethno-cultural monuments might potentially affect diplomatic and economic relations between Canada – in the role of the host society that accommodates them – and the nations and governments they target.

A massacre associated with a communist regime came under Canada’s spotlight in the late 1970s. Located on City land, within the heart of the local Polish community, at the foot of Roncesvalles Avenue, the Katyn Memorial is dedicated to the memory of the 15,000 Poles who went missing at the hands of the Soviet secret police in 1940. The Russian government has refused to classify this event, known as the Katyn Forest Massacre, as a war crime or an act of genocide, although the Russian lower house of parliament, The Duma, did so in 2010.[i] At the time of the Katyn Memorial dedication in Toronto and even before, there was a scent of scandal. On the memorial’s inaugural day, September 14, 1980, the Canadian federal government withdrew its representative without notification.[ii] Ottawa as well as Edmonton, Alberta had previously rejected the proposed monument, arguing it would harm Canada’s relations with Poland and the Soviet Union.[iii] Curiously, the Canadian government, which publicly refused to get involved in the construction of the Katyn Memorial,[iv] decided thirty years later to commission a monument to all victims of Communism in the national capital (see Section III, Competing Heritages).[v]

There are Goddess of Democracy statues standing in both Vancouver (1991) and Toronto (2012) to pay tribute to the Tiananmen uprising of June 4, 1989, when Chinese military forces violently suppressed student-led demonstrations in Beijing’s Tiananmen Square. Although the Chinese government has minimized the importance and partially erased this standoff from public discourse, it remains nonetheless one of the most sensitive political topics in China.

In 1990, the Vancouver Society in Support of Democratic Movement planned for a Goddess of Democracy statue to be installed in Dr. Sun Yat-Sen Classical Garden. It was to be a modified version of a temporary plaster of Paris statue erected in Tiananmen Square during the 1989 protests, which drew upon New York’s Statue of Liberty. The proposal was rejected by the garden’s board. Supporters of the project argued that the board did not want to damage its relationship with the Chinese government, which seem to have donated more than $500,000 of the garden’s cost.[vi] The Goddess of Democracy found refuge two years later on the University of British Columbia campus, between the Student Union Building and the Aquatic Centre.

One year later, in Toronto, another replica of Beijing’s Goddess of Democracy faced a similar censorship situation. In 1992, the Toronto Association for Democracy in China offered the University of Toronto a Goddess statue. Because of possible repercussions and censorship from China, this University’s administration declined the gift. In response to this refusal, a bronze wall sculpture depicting a bicycle crushed by tank treads and a pair of slippers was put up that same year on the back wall of the University’s Students’ Union building, a site beyond the university administration’s control. Broken Bicycle commemorates the Tiananmen massacre through an austere but poignant symbolic statement.[vii] The rejected Goddess of Democracy was finally placed at the York University Student Centre, where the institution had no jurisdiction. Again, in spite of its being beyond the University’s control, the consulate of China in Toronto addressed a letter to then York University President Harry Arthurs expressing discontent over it. The University did not surrender to the pressure, and the statue remained on display until 2011, when new pressures from the Chinese consulate finally led to its removal. However,  the Toronto Association for Democracy in China managed to raise funds to build a bronze version by artist Ruth Abernethy, which has stood outside the Student Union building since 2012.

In 2014, Toronto’s Armenian Community proposed to the City of Toronto, via the Armenian National Committee (ACN), to either donate an existing artwork or to go through the process of having one commissioned to commemorate the 1.5 million Ottoman Armenian victims of the 1915 genocide.[viii] Although two monuments to this genocide’s victims already stand in Toronto (see the Armenian Genocide Memorials from 1984 and 1985), they are situated on the grounds of Armenian churches, on private land. This new memorial proposal would have been acceptable under the 2017 donation public policy, since the federal government officially recognized the Armenian Genocide in 2004. However, the proposal failed. There is evidence that the City of Toronto received strong opposition from the Turkish community, mainly through the Federation of Canadian Turkish Associations.[ix] Other reasons, whether technical, financial, or artistic, might have delayed or thwarted the proposal. However, its intrinsically controversial nature and possible severe repercussions for the municipality appear to have been the main reasons for its unsuccessful outcome.

This situation is reminiscent of a public artwork from the 1990s, jointly funded by the Ville de Montréal and the Montreal branch of the Armenian National Committee (ANC) (see La Réparation in Section I, Historical Antagonisms). The Ville de Montréal, through its Bureau d’art public (BAP), made an essential modification to ANC’s initial commemorative goals. In 1994, the latter first proposed to donate a bust, by a Canadian Armenian artist, to publicly honor the Armenian victims of the genocide perpetrated by the Ottoman Empire’s leaders during the First World War.[x] Due to serious political and economic pressures on the federal and municipal governments by the Turkish diplomatic corps,[xi] the Ville de Montréal decided to expand ANC’s initial commemorative intentions to include the remembrance of all victims of twentieth-century genocides, to commission an artwork with no representational element, and to carefully word its inscription. The local Armenian community was left no choice but to accept the new conditions and financially support the subsequent commission of La Réparation, a marble house-like structure by Quebec artist Francine Larivée.

[v] Don Butler, “A monumental controversy: History of the Memorial to Victims of Communism,” The Ottawa Citizen, 7 Mar. 2015: B1. 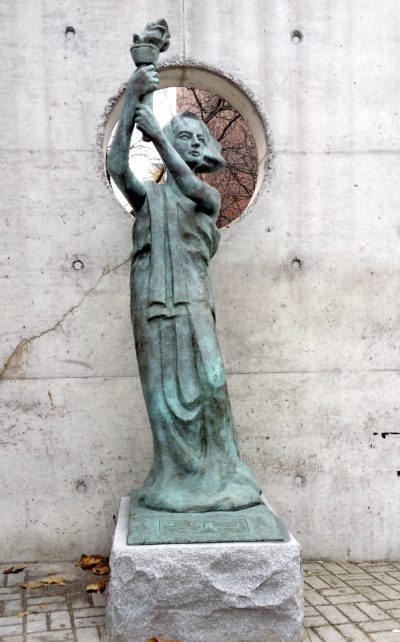 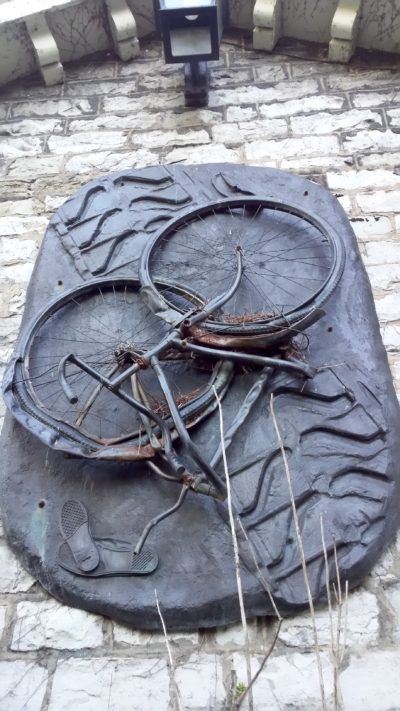 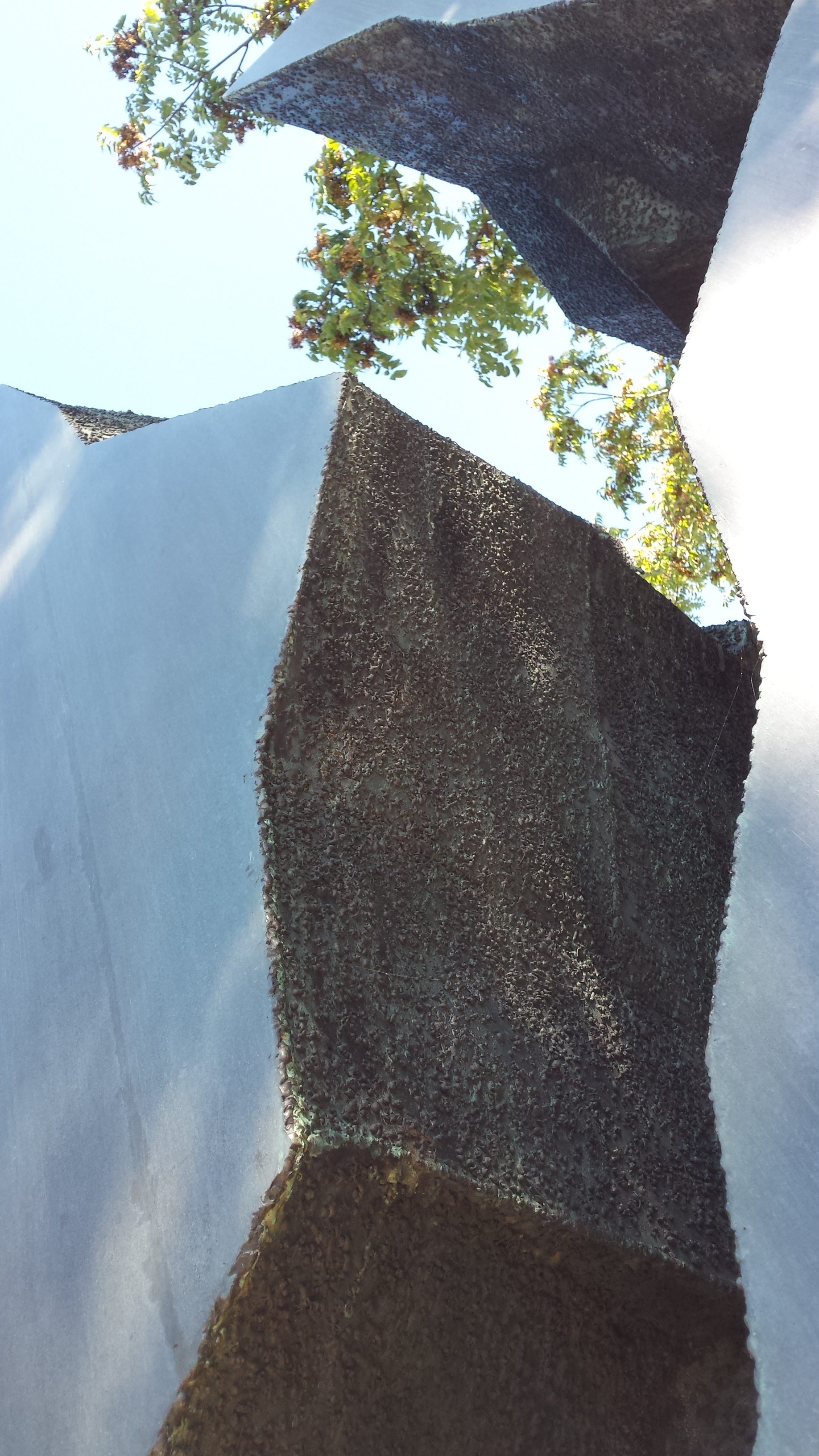