The representation of ‘foreign’ or extra-national traumas and figures in a multicultural country might exacerbate historical antagonisms between different ethno-cultural citizen groups.

Standing in a Montreal City park, the Monument à Giovanni Caboto, a work by Italian sculptor Guido Casini, constitutes an early example of how the representation of a prominent figure attached to an ethno-cultural community –can revive a long-standing disagreement. The monument was funded and spearheaded by the local Italian community – and installed in Cabot Square on May 25, 1935. This statue depicts the Venetian navigator and explorer Giovanni Caboto (John Cabot). The work’s declaration of an early Italian presence in Canada made it a point of contention notably because it appeared to challenge Canadian foundation myths. French Montrealers saw an assertion that Cabot, under the command of England, was the ‘discoverer of Canada,’ threatening the claim of this title for French explorer Jacques Cartier. The main argument in what came to be called the ‘Cartier vs Caboto controversy’  “centred on which national linguistic group could assert a claim to be the first in Canada – Cabot and the English, or Cartier and the French”.[i] Over two years, negotiations between the Italians of Montreal and francophone Canadians focused on determining a careful wording for the monument’s final dedication. They finally agreed upon the following inscription: “To Giovanni Caboto, the Italians of Canada.”[ii]

Greektown, a neighborhood in east Toronto, became an arena of debate over the identity of Alexander the Great when several Greek organizations jointly funded a bronze bust of Alexander, which was unveiled in May 1990 at a municipal park at Danforth and Logan Avenues.[iii] Alexander the Great was and is the centre of a historical quarrel between Greece and Macedonia since both nations claim him as their king, and almost immediately after the artwork’s dedication, citizens of Macedonian descent objected “to the wording of the plaque that identified Alexander as ‘King of the Greeks’ rather than ‘Alexander, King of the Macedonians.’”[iv] Two months later, on Alexander’s birth anniversary, the city’s Greeks and Macedonians clashed in front of the bust.[v] The following summer, another violent incident broke out when members of the United Macedonian Diaspora attempted to mark Alexander’s birth with a wreath-laying. They were stopped by the hundreds of Greek protesters who had gathered at the site.[vi] The bust continued to serve as a focal point for conflict in Toronto, and some Torontonians even suggested its removal.[vii] However, more than twenty five years later, Alexander’s bust still stands.

The Armenian Genocide (1915) is still an intensely political topic which continues after a century to bring Armenians and Turks into conflict all over the world; and Canada is no exception. La Réparation is a house-shaped marble structure dedicated to all victims of twentieth-century genocides. This artwork’s commission involved deep reflection and passionate exchanges among the local Armenian community, Turkish diplomats, and the Ville de Montréal’s public art officers over the form it should take and, more importantly, over the subject to be commemorated. In 1994, the Montreal branch of the Armenian National Committee (ANC) offered the Ville de Montréal a bust which paid tribute to the victims of the Armenian Genocide.[viii] The gift was rejected. After years of negotiations, and also of public disagreements between the Armenian and Turkish communities,[ix] the Ville de Montréal’s Bureau d’art public (BAP) finally convinced the ANC’s leaders to jointly finance and commission a work of public art honoring all victims of twentieth-century genocides through an art competition involving Quebec professional artists. Inside La Réparation’s ‘wound,’ the engraved text reads as follow: “À la mémoire de tous les peuples victimes de génocides au XXe siècle, toutes nations confondues, sans distinction de races: Arméniens, Ukrainiens, Tatars de Crimée, Juifs, Tziganes, Timorais, Bosniaques, Tutsis, Hutus, Cambodgiens, Kurdes et ceux ignorés.” [In memory of all victims of genocide in the twentieth century, in all nations, regardless of race: Armenians, Ukrainians, Crimean Tatars, Jews, Tziganes, Timorese, Bosniaks, Tutsis, Hutus, Cambodians, Kurds, and all unknown victims”].

Toronto hosts an ethno-cultural monument commemorating the tragic episode of the ‘comfort women,’ the more than 200,000 South Koreans girls and women who were forced to provide sex in Japanese military brothels before and during World War II. A bronze statue of a teenage girl was unveiled in 2015 in front of the Korean Canadian Cultural Association headquarters. The young girl is depicted in a sitting position, and a chair next to her invites viewers to see themselves in the monument. Apparently, this sculpture ended up in Toronto, on private land, after its installation in a public park in Burnaby, BC, east of Vancouver, was prevented by strong opposition from the local Japanese community.[x] Similar statues depicting the so-called ‘comfort women’ are installed in another countries. These monuments address the historical antagonism over a ‘difficult’ memory, and therefore have an impact on diplomatic, political, and economic relations between nations. In 2017, Japan recalled its ambassador to South Korea because of a statue erected in Busan depicting the wartime ‘comfort women.’[xi]

[vii] Along with these street clashes, debates about Alexander the Great’s ethnic identity took place in other public forums. In the pages of ethnic newspapers and in radio programs, coffee shops, and even in televised debates, Greeks and Macedonians debated history and interrogated the others’ claims to Macedonia. (“Alexander’s bust should be removed,” reader’s letter, Toronto Star, 1991, 04 Aug. 1991: B2). 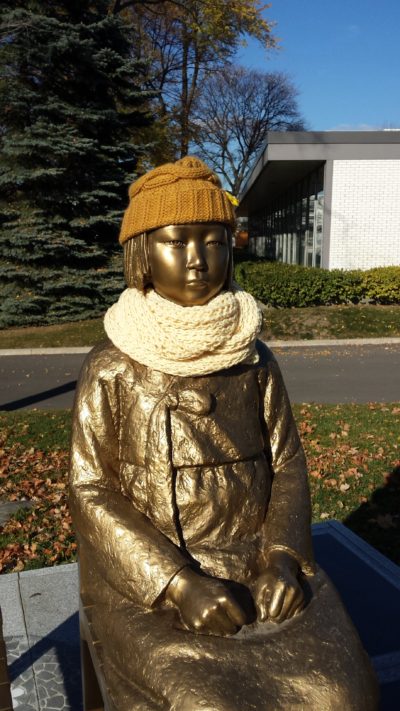 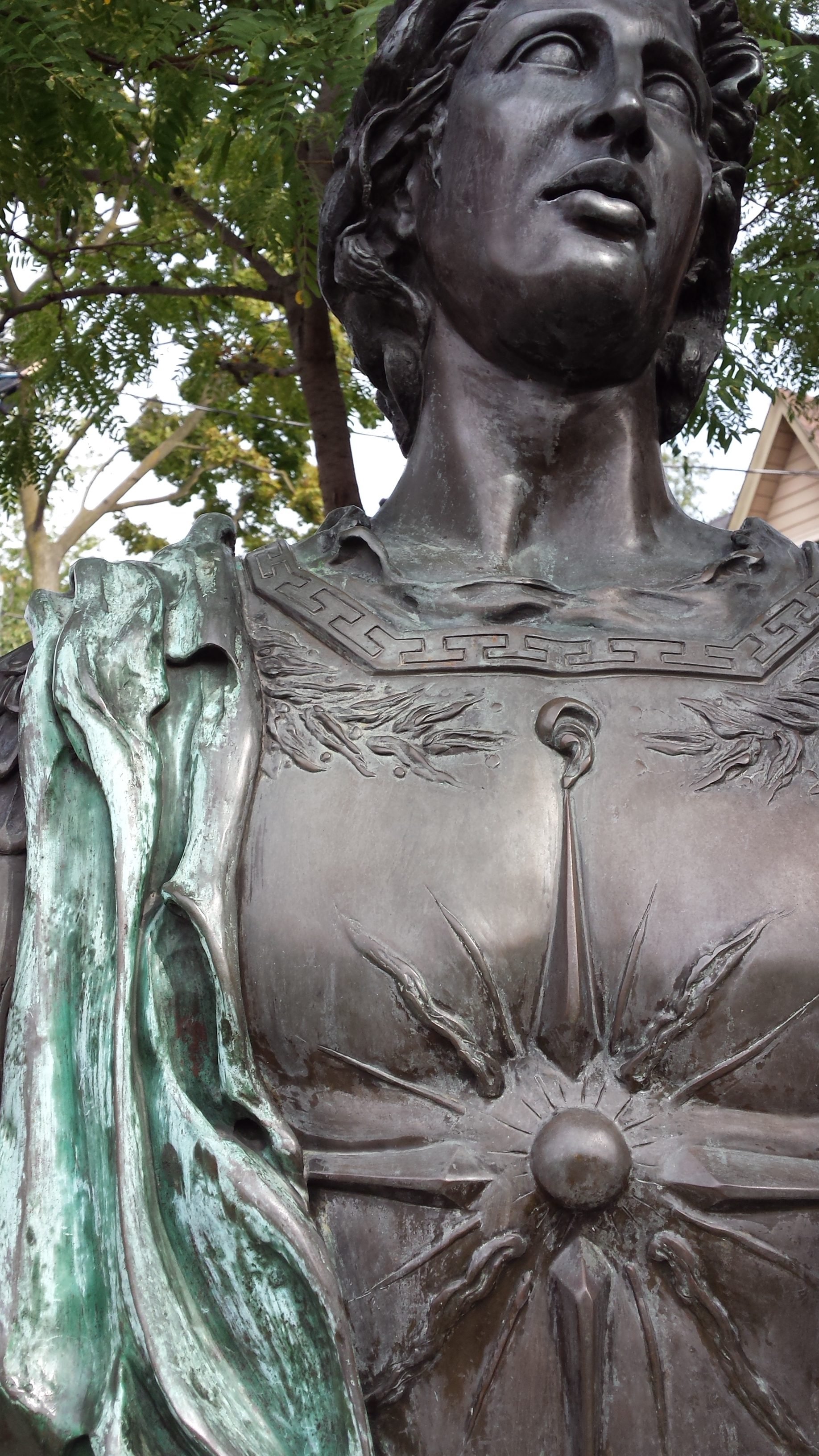 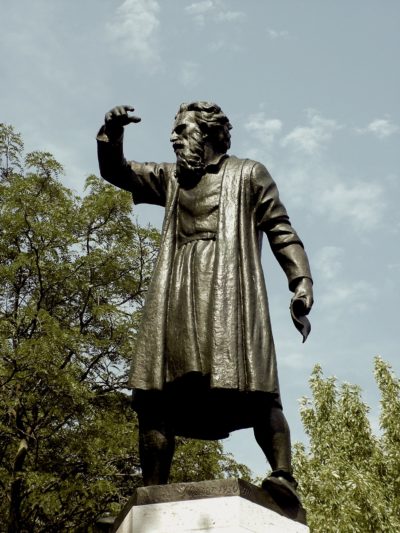